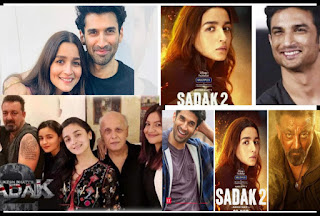 This is the upcoming movie in 2020. The biggest actor and actress are made in this film. The producer of this film produced by Mahesh Bhatt. This trailer is the most disliked trailer in the whole film city. This trailer movie name is SADAK 2. Sadak 2 is a release for the 28 August 2020 in the theatre. Because of the reason for the dislike of this trailer so the producer of this movie is directly connected to the Sushant Singh Rajput murder case.

The fans of the Sushant has also dislike this trailer. Some reason for this film is also flop of the theater and the film mania. The reason for the dislike of this trailer is peoples hate the Mahesh Bhatt producer of this film. Now, these days Mahesh Bhatt is involved in the Sushant Singh Rajput case. The fan of Sushant Singh Rajput also dislikes the trailer of the Sadak 2. In this, many people have cured such as Sanjay Dutt, Pooja Bhatt, Aliya Bhatt, Aditya Roy Kapoor, or many small backward roll heroes.

This movie trailer is the most disliked trailer of the world for Youtube. Before the case of Sushant Singh Rajput mostly peoples are loved for Mahesh Bhatt and now nobody fans of Mahesh Bhatt. From time to time peoples are there and peoples are loved there. Because the reason for dislike is this trailer is also involved in the Sushant case. This movie is very good but no one will see it now that Mahesh Bhatt has made it. On August 28, 2020, it will be available on Flim Premier accounts and also on theater. It took a lot of time to make this film: but the timing of its rails was spoiled and the case of Sushant, it started getting disliked.

Sadak 2 is shooting in India city Mysore, Mumbai, and Uttarakhand. Mahesh Bhatt’s daughter is Aliya Bhatt. Both father and daughter are also in this film daughter is heroin and the father is a producer. Mahesh Bhatt is a very biggest producer in the whole film industry. But since the case of Sushant Singh Rajput case is open so the peoples are hating for the Mahesh Bhatt. Now this time mostly peoples have hated this movie so movies are the backwash.

During this time Sadak 2 movies is a flop for the Flim World. The worst thing is that it is one of the world’s most disliked trailers and movies also shortlisted for the Mahesh Bhatt, Aliya Bhatt, and Sanjay Dutt fans. The most useless thing for Sanjay Dutt: which is his first film trailer which has flopped. Otherwise, his fan following is such that his film trailer never flopped. Because Sanjay Dutt is the biggest celebrity and hero of the film world. Mahesh Bhatt, daughter Aliya Bhatt was a very bad talk for the father was involving the case of the Sushant Singh Rajput. They were very bad of the Aliya Bhatt carrier. Nobody movies can role for the Aliya Bhatt. All producer and director also hate for the Mahesh Bhatt.